According to Facebook user, Ibe Caleb, the young lady pictured below was crushed to death by a truck carrying drinks on her way from the bank.

Read what he posted after the cut…. 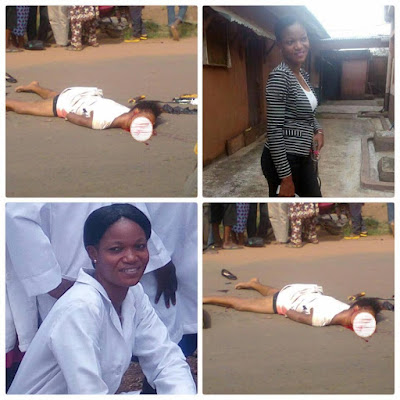 “Report says…………
PLEASE REBROADCAST TILL IT REACH THE NECESSARY QUARTER

Its tragic how one loses an important person,still going through pains of the lost soul the worst happens……..Today being the 6th of December 2016 a final year student of OGUN STATE COLLEGE OF HEALTH TECHNOLOGY IN THE DEPARTMENT OF DENTAL THERAPY was on her way back from the bank to withdraw her project money and the little feeding allowance attached to it, got crushed by the NIGERIAN CONSOLIDATED BREWERIES TRUCK loaded with lots of alcoholic drinks i.e 33,Goldberg……

Funny enough before the arrival of the students down to the accident scene,the Nigerian Consolidated Breweries officials had called the attention of soldiers of ILESE Barracks who shot speedily at students,as a matter of fact students got injured especially females students,as if that wasn’t enough the soldiers of ilese barracks invaded the school premises and still shot at the students….CORRUPTION which was the leading theme in Nigeria as a whole was evident in the DEAN OF STUDENT
AFFAIRS OF OGUN STATE COLLEGE OF HEALTH….How much longer do we have to live like this?? As i write now 9 students of OGUN STATE COLLEGE OF HEALTH ILESE IJEBU are currently in the hospital and then in tears and trauma i ask this question….

WHERE IS NIGERIA GOING??WHY CANT STUDENTS HAVE A SAY??MUST CORRUPTION ALWAYS SPEAK ??………..Talking about the NIGERIAN SOLDIERS whose primary objective is to ”protect the citizens” left their duty post after being lured and bribed by the NIGERIAN CONSOLIDATED BREWERIES OFFICIALS to beat unarmed innocent students…95% of the students of OGUN STATE COLLEGE OF HEALTH TECHNOLOGY who are girls were serious dealt with and striped naked….Tears dropped from my eyes when an 100 level student had an asthma attack due to the shock……

I Thought we had a government??why???? OGUN STATE COLLEGE OF HEALTH has been the most peaceful campus for 40 years now and won several awards where holistic health is practiced Will NOT BE MUTE IN THE FACE OF INJUSTICE,IN THE FACE OF TYRANNY ..As we all know JUSTICE DELAYED IS JUSTICE DENIED …Here are our demands…..

Firstly the truck driver should be produced and persecuted..Secondly the truck should be produced,thirdly an ATM machine should be provided in the school premises because if students did not have to go down to withdraw this wouldn’t have happened…for the soldiers who beat up students should also be provided….A 48HRS ultimatum has been set -….#OPERATION OCCUPY NIGERIAN BREWERIES LOADING!!!!!!!!! #CONCERNED STUDENTS FOR THE UNION……#AN INJURY TO ONE IS AN INJURY TO ALL!!!!!!
R.I.P BLESSING”